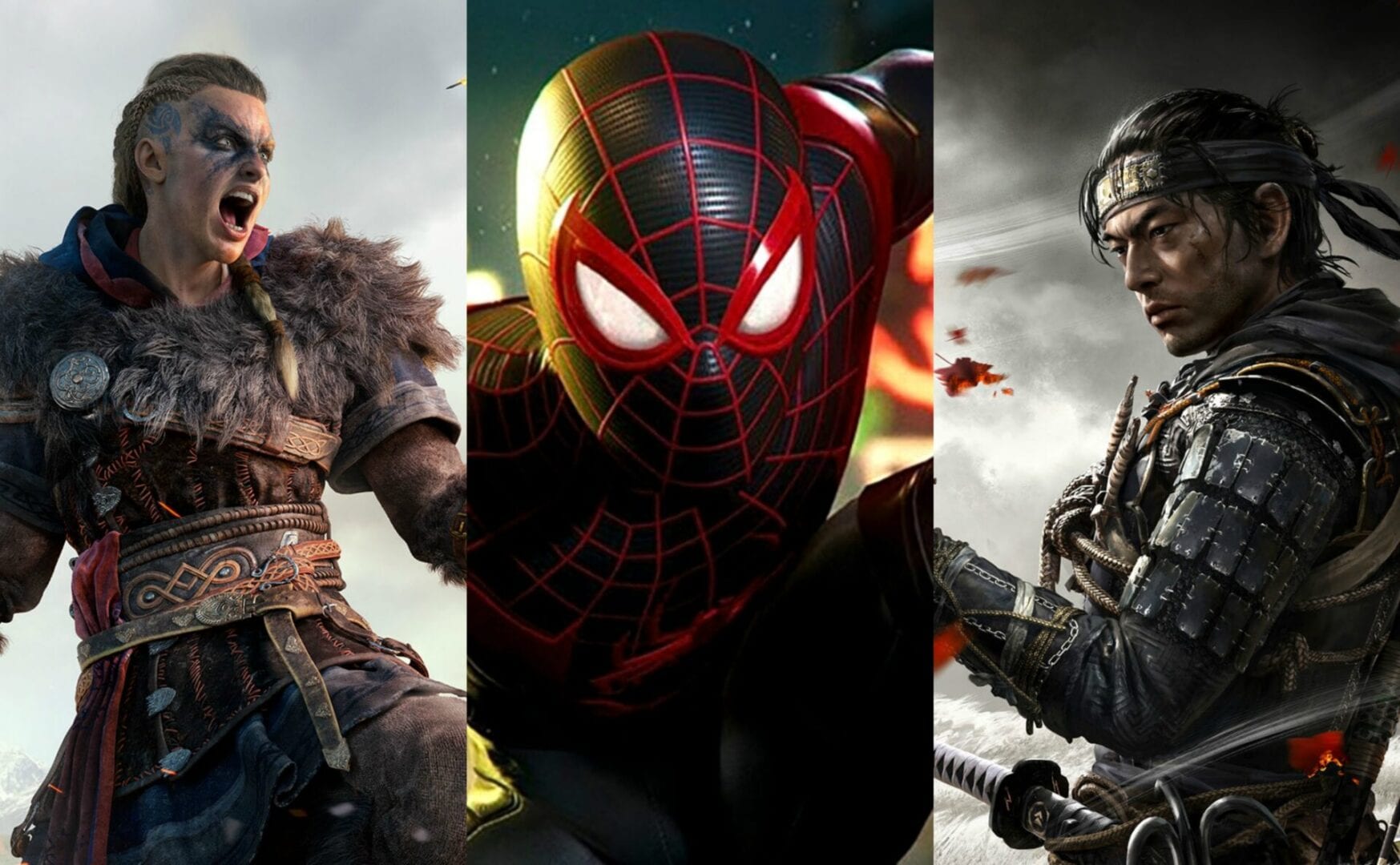 As this year draws to a close the eighth generation of consoles, it has bid farewell with a swansong to great games in 2020, some of which are arguably the most impressive ever on PS4 and Xbox One. Today, as part of Twinfinite’s annual awards season, we take a look back at the best action / adventure games of 2020.

Guide Editor Chris Jecks: In 2018, Insomniac Games brought something special to the world of video games. Marvel’s Spider-Man made our dreams come true of strolling the streets of Manhattan, moving with nonchalant grace while protecting the beloved city from the character of thugs and the vile plans of Doc-Oc.

It scraped off that Spidey itch that we’ve all had for so long, and then some, offering satisfying combat, crossing, and engaging story in one.

Fast forward to 2020 and Insomniac has brought the goods again with Spider-Man: Miles Morales. A sort of standalone extension of the original title, the game saw Peter Parker fly to Europe, leaving Miles to don the costume of Spider-Man, everyone’s favorite neighborhood.

It took me about 10 minutes to remember why I gave the original game a 4.5 / 5 rating in 2018, and I capitalized on the already great experience with the new moves from Venom that delivered powerful cinematic attacks that drop thugs in style.

These new additions to Miles’ arsenal were bolstered by a heartwarming story that gave us goosebumps at the end, and a plethora of collectibles and side challenges to keep you entertained after the credits roll.

As Spider-Man of 2018 was one of the best PS4 exclusives, Miles Morales is a no-brainer for anyone looking for more web action. Plus, it was one of the launching titles for the PS5, using the super-fast SSD and the extra power to make Miles and Manhattan look better than ever.

Editor-in-Chief Alex Gibson: After Assassin’s Creed had a scorching debut on PS4 and Xbox One hardware with Unity, the franchise has gone from strength to strength with a new RPG-centric design.

It started with a smooth reboot in the form of Origins and continued into 2020 with Valhalla, a beautiful and sprawling open-world experience that stands alongside the best action games of the year.

In fact, this could very well be one of my favorite Assassin’s Creed games, thanks to its emphasis on exploration, branching dialogue, and most importantly, the complete change of setting in Britain during the Viking Age. Indeed, where Odyssey’s Mediterranean setting looked too much like Origin Egypt, Valhalla truly feels like a breath of fresh air.

Britain is absolutely stunning, from the rolling countryside in the south to the dramatic hills and mountains further west and north. In particular, the Roman ruins that dot the landscape are a unique and breathtaking spectacle that hides all kinds of interesting secrets.

The storytelling is also excellent for the most part, with each of the regions of England playing out almost like large, interconnected side quests – although there was one too many at the end of the game for my taste.

As for the playing experience, it’s a familiar affair but it’s certainly an improvement over Odyssey, with a new skill tree that offers plenty of choice in how players approach its combat and journey through. .

I really hope Ubisoft keeps the Viking setting for at least one more entry before continuing.

Editor-in-Chief Alex Gibson: If you were skeptical of Final Fantasy VII Remake about 12 months ago, you weren’t alone. After all, even beyond a controversial plan to turn the game into a series, its long production run has had a failed start under developer Cyberconnect, and even Square Enix’s most recent efforts with Fantasy XV do. have hardly inspired confidence.

But the more it was presented, the more it seemed like the project was treated with special care, and it turned out that Final Fantasy VII Remake is indeed a very special game. Against all odds, it has turned out to be a modern classic that feels connected to the original while forging its own daring path at the same time.

I loved almost every minute of the adventure, mainly because although I was sure of what was going on around every corner, I was continually amazed. From its fantastic combat system to the gripping new twists and turns of its revised story, Final Fantasy VII Remake sets the standard for JRPGs in the modern age.

The question now, of course, is where does it go from here, and how the hell can an ending be more dramatic than what we saw in part one. I’ll stick around to find out for sure.

First finalist: The Last of Us Part II

Editor-in-Chief Zhiqing Wan: From its initial reveal, it was clear that The Last of Us Part II would have a lot going on. Not only should this be a satisfying continuation of the first game’s powerful narrative, it should also increase the stakes on the gameplay front. The good news is that he has achieved both of these things.

The Last of Us Part II is much darker and grainy than the first game in terms of story, and that translates extremely well to how the game actually plays out.

We won’t mince our words here; it is not a very pleasant game to play. Ellie may be lighter and faster than Joel, but her actions still carry a weight and the game makes sure you feel every slice and stab as you make your way through the humans and the infected.

Part II has also significantly improved its AI, as enemies now actively communicate with each other and respond to what you do. Really, the responsive AI is by far the most impressive part of the game, as it doesn’t feel like you can just chew up enemies with broken stealth mechanics or hide hoping they forget about you.

While some levels can go on for too long, causing a feeling of rhythm at times, The Last of Us Part II never fails to make the player tense every step of the way. It’s an exhausting and exhausting game to play, but maybe that was the point from the start.

Editor-in-Chief Alex Gibson: Granted, whenever I hear people suggest that Ghost of Tsushima is â€œjust another open world game,â€ I get triggered. Of course, its design is unmistakably based on a popular model, but the finesse and innovation with which it has been executed are surely the take-out that everyone should praise instead!

How many other open-world games, for example, are designed on the same cinematic initiative as Ghost of Tsushima, from minimalist HUD to complete lack of waypoints?

How many games, period, have you pondered story rhythms in hot springs to improve your health, compose poetry for cosmetics, and follow foxes for benefits?

Granted, a lot of it turns out to be a busy job by the end of the game, but I love the magic of exploration in Ghost of Tsushima, especially given the absolutely stunning aesthetic of its setting. Indeed, Tsushima may be loosely based on the story, but its visual charm is more enchanting than any high fantasy game I’ve ever played.

And then there’s the fight – oh, the fight! Who needs a lock when you have such a tactile sword game? And even now, I just can’t resist an Akira Kurosawa-inspired confrontation with rogue Mongolians still patrolling Tsushima after my solitary release from the islands.

Not that I’m struggling to do anything, mind you, thanks to the release of its surprisingly robust co-op multiplayer expansion, Legends. The new mode came out of nowhere and added a slew of new content to be sliced, which makes the most of the game’s brilliant combat system with even tougher challenges than the single-player experience.

Overall, I consider Ghost of Tsushima to be one of the biggest achievements of 2020, marking the arrival of what looks set to be one of Sony’s iconic IPs in the future, and has earned its place. best action / adventure game of 2020. Hopefully an even better sequel isn’t far away.