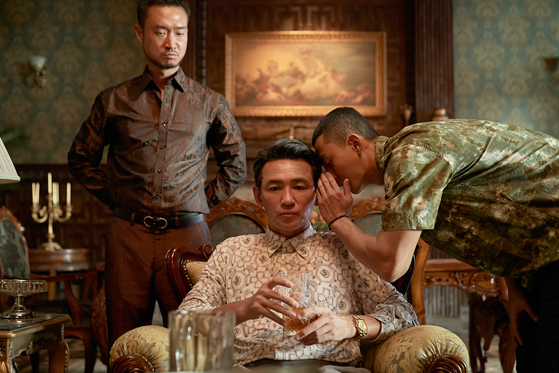 A scene from the Netflix Korea series “Narco-Saints” (2022), which was criticized by the Surinamese government for portraying Suriname as a country riddled with gangs and hard drugs. [NETFLIX]

Netflix Korea’s original series “Narco-Saints” is currently the fourth most-watched show on the streaming platform globally, having peaked at No. 3. The show is proving to be a hit since its launch on 9 September, but has become the center of a diplomatic controversy as well as another example of Korean media’s lack of cultural sensitivity when it comes to depictions of foreign countries.

“Narco-Saints” is titled “Suriname” in Korean, taking the name of the Latin American country where it takes place. The six-episode show is loosely based on the true story of Cho Bong-haeng, a Korean drug lord who ran a large drug trafficking organization in Suriname during the late 1990s and early 2000s. The start of each episode states that the series is “based on a true story, but characters and events from the series have been recreated for dramatic purposes.”

Nonetheless, ‘Narco-Saints’ portrays the former Dutch colony as a country riddled with gang activity and hard drug dealing, with corrupt police and even a president who takes bribes from the drug lord. Korean.

“Three quarters of the population of Suriname are linked in one way or another to the drug trade”, says one of the main characters of the series. 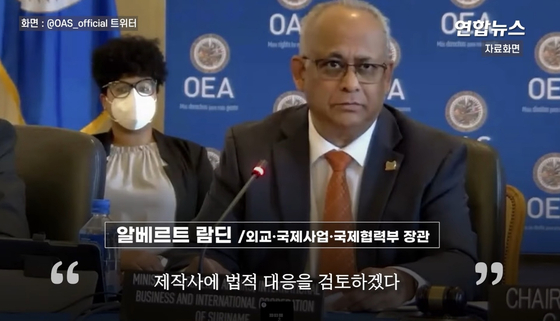 Albert Ramdin, Suriname’s foreign minister, said he would take legal action against the producers of “Narco-Saints” for their negative portrayal of the country. [SCREEN CAPTURE]

The show’s success was not good news for the Surinamese government. Albert Ramdin – the Surinamese minister for foreign affairs, international trade and international cooperation – told a press conference last week that he would take legal action against the producers of “Narco-Saints” for having describes Suriname as a corrupt country associated with drugs. . Minister Ramdin said he would send an official letter of objection to the producers and contact Korean diplomats.

The Korean public’s reaction to the Surinamese government’s strong objection was mixed. Some defend the show, saying the story and title were simply inspired by real events that actually happened in Suriname. Others criticize the producers’ decision to call it “Suriname”, asking how Koreans would feel if a show titled “Korea” on a global platform portrayed the country in a negative light. Many Koreans also confessed to being surprised to learn that Suriname is a real country, and not a fictional nation on the show. 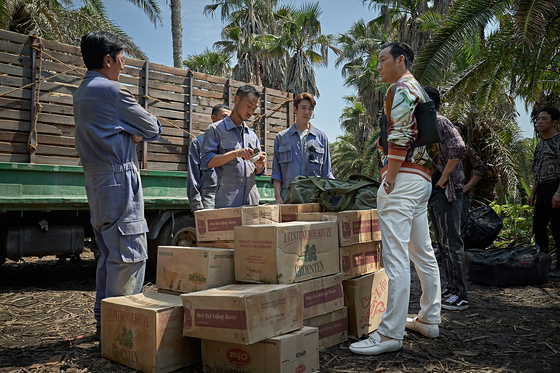 A drug-dealing scene from “Narco-Saints” [NETFLIX]

Comments from Surinamese residents also appear to be mixed, with some taking offense and others reacting cynically to Minister Ramdin, saying the depiction in “Narco-Saints” is not too far off the mark. As the criticism became high profile, the Korean Embassy in Venezuela, which also covers Suriname, warned local Korean residents to pay close attention to their safety.

“Most Surinamese don’t know anything about this series, so a security warning is an overreaction,” Surinamese resident Davin Mahespalsingh told Korea JoongAng Daily. “But I’m really disappointed that they portrayed Suriname that way. […] They described Suriname as run entirely by drug gangs. It really reinforces stereotypes.” 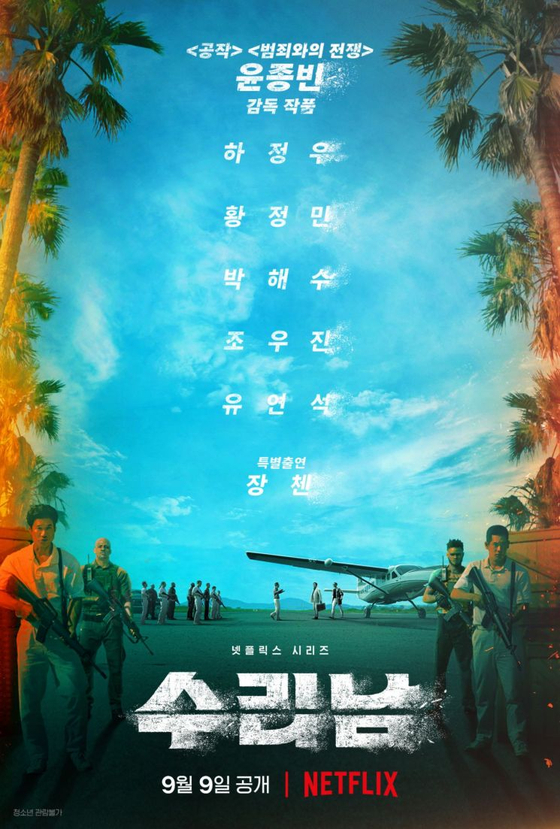 Narco-Saints poster. The show is called “Suriname” in Korean. [NETFLIX]

Local media reported that the show’s English title was also supposed to be “Suriname”, but was changed to “Narco-Saints” after the Korean Foreign Ministry relayed concerns from the Surinamese government last year. .

“Narco-Saints” was indeed filmed in the Dominican Republic and Korea, but its success left a strong impression on Korean audiences. Without much prior knowledge, the criminal portrayal of the country in the series is pretty much all that sticks in the minds of Koreans.

“It’s interesting to name the series ‘Suriname’ in Korean,” said Indra, a 27-year-old Surinamese national currently living in the Netherlands. “I don’t know what to think about it. I’m not personally offended, although it’s crazy that they made Suriname look bad. On the other hand, I am aware that there are many other movies and shows depicting certain countries and people in a bad way, such as the Dutch TV show “Mocro Maffia” about a Moroccan gang involved in trafficking of cocaine in Amsterdam.

The “Narco-Saints” controversy is far from the first of its kind.

Earlier this year, the Korean crime action movie “The Roundup” (2022) was banned from showing in Vietnam because it depicts Ho Chi Minh City as a lawless zone, where Korean criminals run rampant, kidnap and murder tourists. 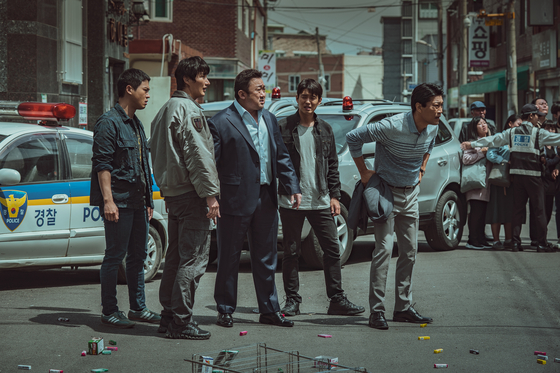 A scene from the crime action film “The Roundup” (2022), set in Vietnam [ABO ENTERTAINMENT]

Such backlash is not limited to Korean media. The 2005 American gore film “Hostel”, set in Slovakia, depicts the Eastern European nation as an extremely poor country riddled with brutal crime. The film angered the Slovak government so much that its culture ministry invited the director, all expenses paid, to come and see the country for himself.

The 2006 American-British mockumentary “Borat! Cultural Learnings of America for Make Benefit Glorious Nation of Kazakhstan” has angered Kazakhs by portraying Kazakhstan as a bigoted, superstitious country with primitive infrastructure – despite actually being the largest economy in Central Asia – and was eventually banned by the Kazakh government. 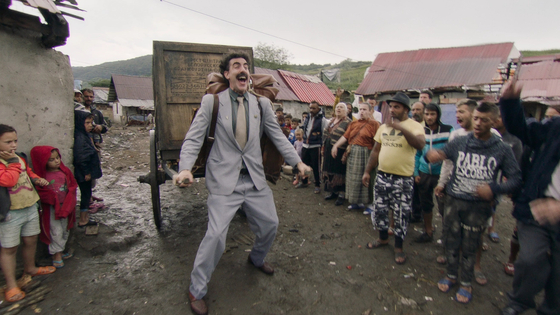 A scene from the 2006 US-UK mockumentary “Borat! Cultural Learnings of America for Make Benefit Glorious Nation of Kazakhstan”, which was banned by the Kazakh government [20TH CENTURY FOX]

However, it is also true that Korea – a largely homogeneous nation with a small number of immigrants – has shown a tendency to oversimplify other countries and their cultures as a theatrical device. Notable examples include the films “The Yellow Sea” (2010), “The Outlaws” (2017) and “Midnight Runners” (2017), which depict Seoul’s Chinatown as a hotbed of crime in which even Korean police have afraid to enter. 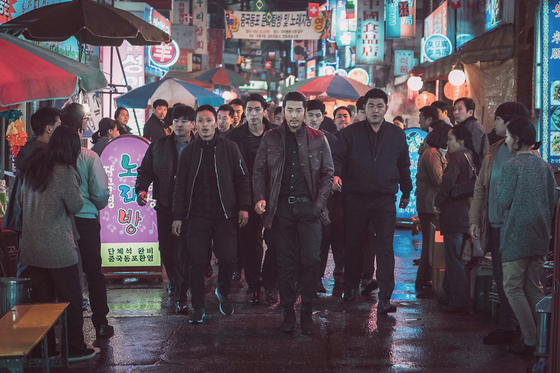 A scene from the police action film “The Outlaws” (2017), which is set in Seoul’s Chinatown [MEGABOX PLUS M]

Korea has also long avoided the scrutiny of cultural awareness, as its content was mostly consumed domestically before the rise of Hallyu (Korean wave). However, discussions around cultural sensitivity have become common in recent years, now that Korean shows are watched around the world.

“Experts have been pointing out for years that this kind of insensitivity will be a risk factor for Korean content,” said pop culture critic Kim Heon-sik. “These warnings were ignored and it continued to happen not only in Korean media, but also in K-pop. We continued to see other cultures, especially Southeast Asian countries, be appropriated or mocked. Now that look has reached a country in Latin America.

“Korean production crews tend to slander a country or region as a conspiracy,” said Zicarlo van Aalderen, a Dutch K-dramas and K-pop viewer.

“It happens in other countries too, but it’s just a bit more obvious when watching K-dramas. The most shocking to me was ‘Descendants of the Sun’ (2016), which was supposed to be in a country in the Middle East but which used Greece as a backdrop and grease to make the local children look dirty. It was a one-dimensional representation of what was supposed to be the Middle East; maybe even a half-size image. 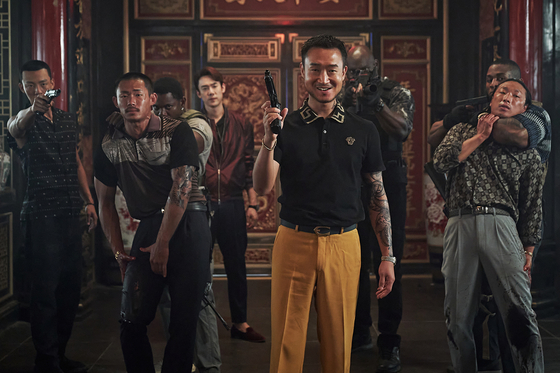 A scene from “Narco-Saints” [NETFLIX]

A recent trend in Korean media is to use fictional cities as settings. This is often done to avoid imposing stereotypes on certain regions or potentially offending residents of an actual area. JTBC’s “World of the Married” (2020), which follows the lives of serial cheaters, is set in the fictional town of Gosan and “My Liberation Notes” (2022), which focuses on people who have no means of living in Seoul, is located in the invented city of Sanpo. However, such sensitivity seems rarely extended to foreign countries.

The concern is that such oversimplified – mostly negative – portrayals of a country can embed stereotypes in the minds of Korean viewers. 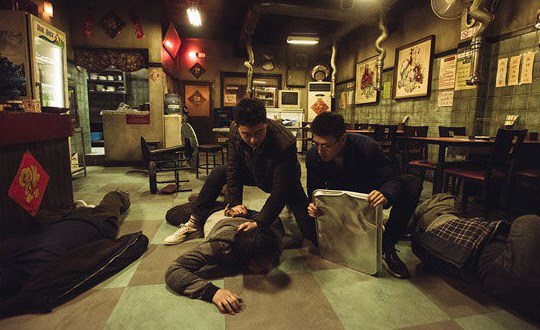 These unflattering representations can lead to diplomatic friction. Local media have expressed concern that Suriname and other Latin American countries may choose to vote for other cities vying to host the 2030 World Expo rather than Busan in Korea, as they are members of the Bureau International des Expositions (BIE), which oversees World Expos.

“Koreans object very strongly when Hollywood, for example, portrays Korea in a negative light,” critic Kim said. “But through the Narco-Saints, we have to ask ourselves, ‘Are we better off when we look at other developing countries? and try to think from their point of view.