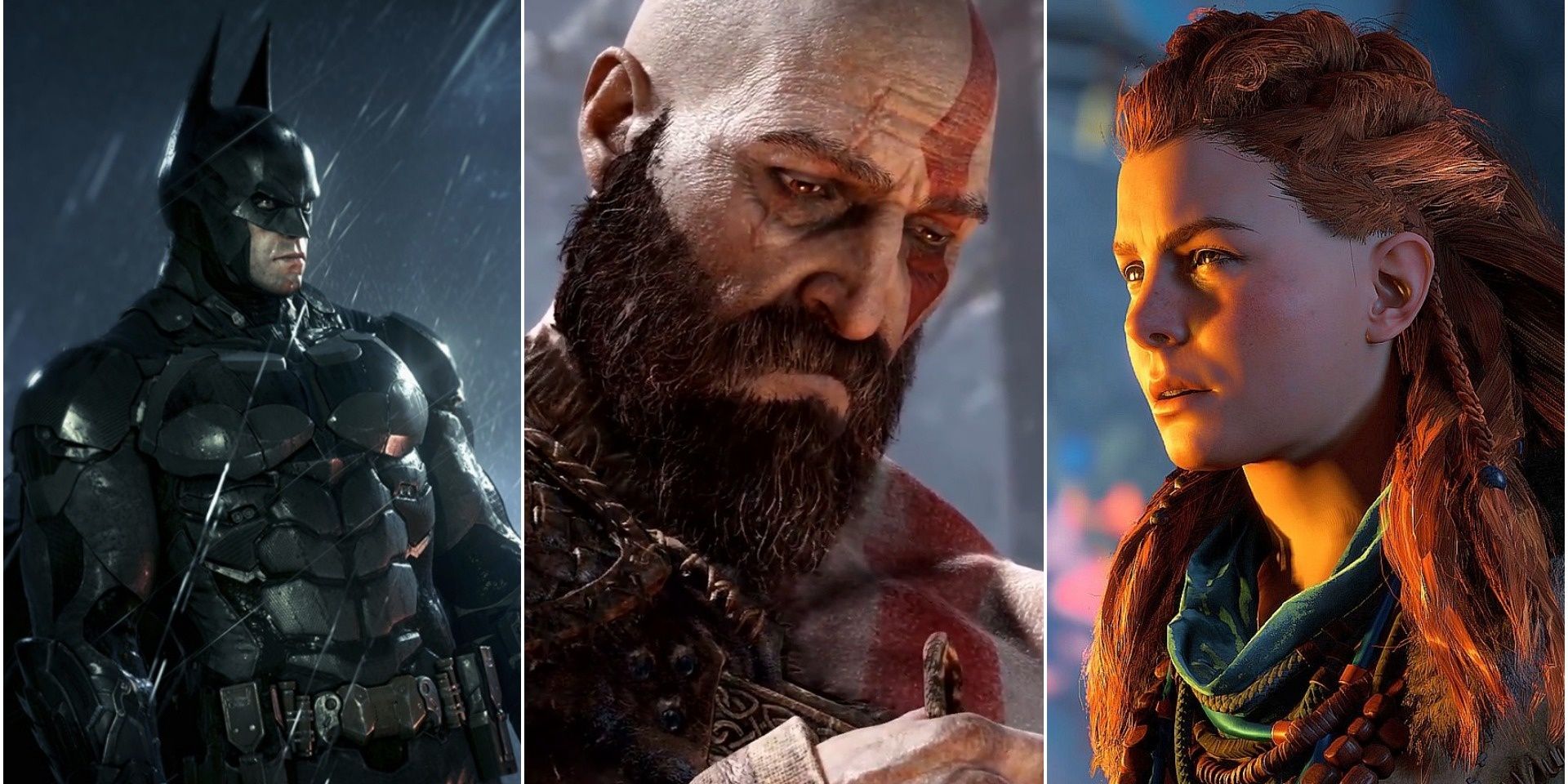 Video games can do so many things. They can be stress relievers or even stress inducers. They can serve as gateways to other perspectives we never would have considered, allowing us to live vicariously through one another and witness different experiences. But most of all, video games are an escape from reality that tells amazing stories and shows wonderful environments that we could only dream of.

Action-adventure games have dominated the gaming landscape for as long as we can remember. From old classics like Banjo-Kazooie to modern gems like The Last of Us, the genre has produced some amazing games. While the Action-Adventure genre can be a bit tricky to identify, as long as there is an element of exploration and discovery, you’re going to be in for a treat. The following games are some of the best in their genre, offering compelling storytelling, memorable characters, and interesting environments.

After his split from Konami in 2015, the industry was eagerly awaiting legendary director Hideo Kojima unveiling his first solo project. After much anticipation, Kojima Productions revealed Death Stranding at E3 2016, a game that certainly fits the criteria of Kojima’s unbridled imagination.

Death Stranding stars Norman Reedus (best known for his role as Daryl on The Walking Dead TV series) as Sam Bridges, a delivery boy who travels the arid United States in an attempt to reconnect scattered settlements. When it launched in 2019, Death Stranding received generally positive reviews and a Director’s Edition was created for the PlayStation 5.

In the early days of console, it was pretty normal to have superhero games based on the current movies of the time. Some classics, like Spider-Man 2, are still considered incredible action-adventure games today. But in 2009, Rocksteady took the superhero adventure genre to new heights with Batman: Arkham Asylum.

The first title in the Arkham series featured the Cape Crusader in a darker setting, as Batman attempted to contain the escaped inmates of Arkham Asylum. The series has expanded the environment to include everything from Gotham to Arkham City and Arkham Knight, creating one of the most immersive game worlds to date. Already one of the most popular superheroes in history, the Arkham series has further increased the popularity of Batman, as the series has been acclaimed and successful.

Among the long-running Assassin’s Creed series, Odyssey was the first to introduce the choice of a male or female character. I hope you chose Kassandra because she not only has become one of the best characters in the series, but her actions have shown that she is one of the best role models in games. In addition to a memorable protagonist, the Odyssey setting is arguably the most astonishing of the series.

The eleventh installment in the series, Odyssey was the first in the series not to follow the traditional power struggle between the Brotherhood of Assassins and the Order of the Templars. Instead, Odyssey followed the story of a young warrior fighting in the Peloponnesian War between Athens and Sparta. Although its predecessor was called Origins, Odyssey is technically the first game in the series chronologically, set in 431 BC. Odyssey also emphasized RPG elements with expanded dialogue and upgrade options.

Naughty Dog rose to fame with his creation of Crash Bandicoot and Jak and Daxter for the early PlayStation consoles. The developer continued his game development masterclass with the Uncharted series. The first in the series, Uncharted: Drake’s Fortune, introduced us to treasure hunter Nathan Drake.

Drake’s personality and obsessive desire for exploration has led many to compare him to another legendary adventurer, Indiana Jones. It was reported that the gameplay of the first Uncharted game was heavily inspired by Gears of War, enough that the game was delayed until the launch of the Xbox title. Rumors have circulated since early 2021 that another Uncharted game was in the works, but nothing concrete has been revealed.

Since acquiring the exclusive rights from Disney to develop Star Wars games in 2013, this has been a bit of a hit and miss for Electronic Arts. The company has had a lot of trouble with microtransactions that frustrated its player base, especially with Star Wars Battlefront 2, but has apparently learned from its mistakes with Jedi: Fallen Order.

This new adventure took place after the rise of the Empire, approximately five years after the events of Revenge of the Sith. The game introduced us to a new young Jedi hiding from the growing Empire named Cal Kestis. After revealing his Force powers, Cal is hunted down by Imperial Inquisitors who were trained by Darth Vader himself. Jedi: Fallen Order contains plenty of environments that reward you for in-depth exploration. In August 2021, EA confirmed that the studio will continue to invest in the world created in Jedi: Fallen Order.

Immediately after the critical success of Red Dead Redemption, Rockstar Games began work on the development of the next in the series. Over eight years of development later, Red Dead Redemption 2 launched with exceptional praise. The game is among the top rated on Metacritic and many ranked it as their Game of the Year in 2018.

Despite having number two in the title, Red Dead Redemption 2 is actually a prequel to the events of its predecessor. It follows the story of Arthur Morgan, a long-time member of the Van der Linde gang. Throughout the game, you finally meet John Marston, the protagonist of Red Dead Redemption. The game offers an amazing open world with plenty of activities to fulfill your dreams of wandering the Wild West.

The Last of Us Part 2 expanded the incredible world of its predecessor, while also bringing the gameplay elements to modern standards. The improved combat mechanics and polished graphics, along with the emotional story, were enough for The Last of Us Part 2 to claim Game of the Year honors in 2020.

One of the biggest surprises of 2017 was Horizon Zero Dawn from Guerrilla Games. The original story featured an instant fan favorite in Aloy, a young hunter trying to survive in an apocalyptic world infested with robotic dinosaurs. Horizon Zero Dawn was the developer’s first game since Killzone 3.

Overall, Horizon Zero Dawn has received positive reviews with its beautiful open world and gripping story. The success of Horizon Zero Dawn led to an expansion in the same year of launch called The Frozen Wilds, and a sequel, Horizon Forbidden West, is slated to launch in 2022.

A 2020 Game of the Year contestant, Ghost of Tsushima was an incredible story of sacrifice. Controlling Jin Sakai, Sucker Punch Productions made you really think about whether the end justifies the means of trying to avoid the Mongol invasion that followed. While fighting the Mongols, Sakai is faced with decisions that will ultimately save his people, but damage their heritage and honor in the process.

Ghost of Tsushima has stunning scenery that changes throughout your game. Many different armor sets can be obtained that will change Sakai’s appearance, as well as his attributes. Ghost of Tsushima has received several accolades, including Game of the Year at the Tokyo Game Show.

The god slayer is also the game slayer. Recently voted the greatest game of all time, God of War brings us back to the forgotten savagery of Kratos. Granted, Kratos is a bit colder this time around, as he and his son, Atreus, make their way through Scandinavia. But even though Kratos tries to be a respectable father figure for Atreus, he soon realizes that sometimes violence is the only answer.

Compared to previous episodes in the series, Santa Monica traded the Kratos Blades of Chaos signature for the Leviathan Ax. The game also featured a lot of RPG elements, such as combat enhancements that would affect different playstyles. Santa Monica received huge praise and accolades for God of War and the sequel, Ragnarok, is set to launch in 2022.

NEXT: Things Everyone Missed In The God Of War: Ragnarok Trailer

You have options when it comes to choosing a version for Lann in Pathfinder: Wrath of the Righteous – here are the best ones.

After graduating from the Walter Cronkite School of Journalism and Mass Communication, Avery Feyrer worked as a web content editor at the local sports radio station in Arizona. After realizing that his real passions were in games, Avery began writing game reviews for his personal website (coffeescorner.com) before becoming a regular contributor to MP1st. Avery specializes in creating all kinds of lists, which prompted him to apply as a list article writer for The Gamer. You can find Avery on Twitter @ CoffeeBlack_910.