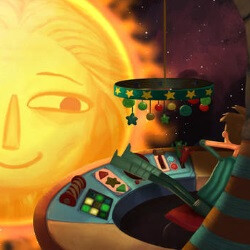 Adventure games are exciting, in-depth experiences for patient, curious players who enjoy rich, fantastical stories. Mobile device touchscreens are perfectly suited for their type of point-and-click gameplay with some light combat mixed in. Playing any of the 10 games we’ve listed below is like having an exciting novel come to life with awe-inspiring visuals, an atmospheric soundtrack, and immersive interactivity.

A perfect antidote to the occasional time waster, these titles are for gamers who are in it for the long haul and enjoy games as art. But if you have the time and the curiosity, don’t hesitate to try them, whatever your relationship with games. You might find them as addictive as your favorite TV series!

Four thousand years passed before the Galactic Empire and hundreds of Jedi Knights fell in battle against the ruthless Sith. You are the Jedi Order’s last hope. Master the light side of the Force and save the Republic, or fall to the dark side and conquer all. Be a hero or a villain, a savior or a conqueror… you will decide the fate of the galaxy!

Star Wars: Knights Of The Old Republic offers an epic Star Wars role-playing experience with unique characters, creatures, vehicles, and planets. You can use over 40 different force powers and build your own lightsaber. You’ll visit iconic Star Wars locations like Tatooine and the Wookiee homeworld, Kashyyyk. Your party can include nine customizable Star Wars characters from different races, including Twi’leks, Droids and Wookiees. And for the very first time, the game offers achievements!

The wolf among us

The Wolf Among Us is a five-part episodic adventure from the creators of The Walking Dead. Fairy tale characters are murdered in a tough, violent and mature thriller. Playing as the big bad wolf, you’ll find that the brutal and bloody murders are just the tip of the iceberg and every decision you make can have huge consequences. Based on the Eisner Award-winning Fables comic book series, the game is great fun.

Kate Walker is an ambitious young lawyer from New York tasked with a seemingly simple mission: the sale of an old automaton factory hidden in the Alpine valleys. Little did she know that picking up the case would turn her life upside down. Traveling from Western Europe to the far reaches of Eastern Russia, she encounters a host of incredible people and places in her attempt to find Hans, a genius inventor and the key to unlocking the secret of Syberia.

Exiles is a 3D Sci-Fi RPG set in a distant world. In the near future, a colony on a distant planet has been driven to isolation and desolation, as a corrupt government tries to enslave it with a deadly virus. You must become one of the Elite Enforcers and participate in various missions to unlock the secrets of the plot to enslave the world. You will also be able to unleash a large arsenal of weapons and items against vicious aliens and mechanized enemies.

Broken Age is a family-friendly, hand-animated, puzzle-filled adventure game with an all-star cast including Elijah Wood, Jack Black and Masasa Moyo. Conceived by industry veteran Tim Schafer, Broken Age is a timeless coming-of-age story of puking trees and talking spoons. Sounds absurd? Well, in the game, you play as Vella Tartine and Shay Volta, two teenagers in eerily similar situations, but in drastically different worlds. The player can freely switch between their stories, helping them take control of their own life and deal with the unexpected adventures that ensue.

Meet Manny Calavera, a travel agent at the Department of Death. He sells luxury packages to souls on their four-year journey to eternal rest. But there are problems in paradise, and you must help Manny unravel a plot that threatens his very salvation. One of the most acclaimed adventure games of all time, Grim Fandango features an epic four-year story in the life (or death) of Manny Calavera, the travel agent for the dead. The game has been remastered to look, sound and control better than the original, but it’s still a classic of the genre, with a unique cast of characters and an original combination of film noir and Mexican folklore. .

Gabriel Knight Sins of the Fathers

You are struggling author and bookseller Gabriel Knight, investigating a series of savage ritual murders in New Orleans and their connection to the sinister mysteries of voodoo. The deeper you delve into Jane Jensen’s tale of terror and suspense, the closer you’ll get to uncovering the secrets of your own family history and the unfolding fate of Gabriel. You can also experience one of the masterpieces of adventure gaming all over again in a fantastical retelling of the award-winning 1993 murder mystery game with all-new puzzles, scenes and HD graphics.

One of the all-time classic adventures, “Broken Sword: Director’s Cut,” takes sassy journalist Nico Collard and fearless American George Stobbart on a mysterious journey of intrigue and peril. You must guide George and Nico on an adventure across the world, exploring exotic locations, solving ancient mysteries and foiling a dark conspiracy to reveal the secret truths of the Templars. Featuring a widely loved touchscreen interface, the game introduces a new narrative thread alongside the classic story, adding new puzzles and hilarious jokes.

With artwork by Jaume Illustration, a half-million-word script by Meg Jayanth, and original music by Laurence Chapman, 80 DAYS is an interactive adventure made up of your choices that gets different every time you play. As Phileas Fogg’s loyal valet, Passepartout, you must balance your master’s health, finances, and time, while choosing your own path from town to town across the world. Buckle up for early departures, but don’t let yourself go broke, or you’ll sleep rough and beg for help! Trade items for profits and scavenge gear for the conditions you’ll face, but keep in mind that too much baggage will slow you down.

The application is connected to the network, with a live feed that shows you the position of all the other players in the game, their routes, triumphs and disasters. You can race to be the fastest – or look ahead to discover the secrets of the world.

Originally released in 2005, Fahrenheit (known as Indigo Prophecy in North America) was a breakthrough in interactive storytelling, oscillating between the worlds of film and game. The newly remastered edition features graphics updated, full controller support, ET is based on the international uncut/uncensored version of the game. Prophecy Remastered is the definitive version of the supernatural murder mystery.